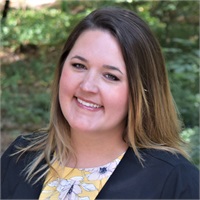 Magi McEntire is an LPL Financial Advisor with Worth Wealth Management.

After serving as Executive Assistant for a period of time, Magi became a Financial Advisor. However, Magi is no stranger to the financial realm; she worked five years for a locally owned bank as the Community Relations Manager.

Early in life Magi developed a loyalty to her community, and after moving to the community of Brighton in 2009, she wasted no time becoming involved.  She is a member of the Brighton Legacy Foundation, the philanthropic arm for the City of Brighton, where she served as Treasurer for three years.  Magi also chairs the Brighton Nonprofit Council, which aims to bring nonprofit resources together to better serve the community. In 2016, Magi was voted as the Greater Brighton Chamber of Commerce Young Professional of the Year. Magi continues her involvement with the Brighton Young Professionals, and she’s quick to remind everyone that age is “just a mindset.”

Magi is an avid gardener and chef.  She and her husband, Cory Kramer, and their son Devin, enjoy camping, watching football, and hanging out together on their small acreage – lovingly called The Kramery – with their menagerie of pets.